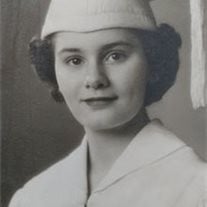 Anne Virginia Gottmann was born at home in Chicago's Old Town neighborhood on February 20, 1932, to Sebastian and Teresa (nee Dumelle) Wolf. At birth she was named Anne Virginia Wolf and in her adult life went by the name "Anne," although many in her family referred to her warmly as "Ginny." She lived in Old Town until she was 12 years old. That year her family moved to St. Benedict Parish where she attended St. Benedict's school for a few years. At St. Benedict's she served as a classroom monitor where she supervised the behavior of fellow students, including one Charles Frederick (Chuck) Gottmann, with whom she shared a birthday and whom she later married. Anne returned to the Old Town neighborhood for high school at St. Michael's, where she was an accomplished bowler. Despite attending different high schools, she began dating Chuck Gottmann in her freshman year of high school. Other than the two years her then husband Chuck  served in the United States Army in Trieste, Italy, in the early 1950's, they have been together ever since. After high school, Anne qualified as a shorthand stenographer and worked as a secretary and stenographer at the Kemper Insurance Companies in the Loop. At age 20, she and Chuck married. At first, they lived in the Fox Lake area in a house that Chuck had built himself. Conditions were somewhat Spartan and their commutes were long. Soon thereafter, Uncle Sam sent a letter to Chuck inviting him to participate in military training and world travel as a new draftee. Chuck headed off to perform his duty and was ultimately stationed in Trieste. During the two years Chuck served in the Army, Anne moved back to Chicago and took an apartment on the second floor of her parent's home in St. Benedict's parish. Anne's son Charles Frederick, Jr., was born during Chuck's Army service. Her daughter Deborah Anne, whose married name is Deborah Boyle, was born a few years later. Upon Chuck's return to civilian life, Anne and Chuck persevered to establish themselves in Chicago. Chuck worked his way up from an IBEW "B" card to an "A" card and qualified to become an electrical contractor. Ultimately they bought co-ownership in Berwyn Electric Company in Chicago. In 1960, they bought their first house at 3931 N. Janssen. They later built a house together at the corner of George and Mango Street, where they installed the latest technology, which they called "all electrical everything." In 1973, Chuck sold the Berwyn business. Anne and he then bought and rehabbed houses and traveled together in their mobile home to locations all across North American whenever the mood struck. They owned property in Westfield, Wisconsin, and enjoyed outdoor recreation there for many years. Anne spent her later years with Chuck in their house on Oleander Street in the St. Francis Borgia parish. She enjoyed novels, family get-togethers and the company of friends. She is survived by her husband of 66 years Charles Frederick ("Chuck") Gottmann; her two children Charles Frederick, Jr., and Deborah Anne Boyle; and her multiple grandchildren and great grandchildren. Visitation will take place from 9:00 a.m. until 10:00 a.m. Saturday May 12, 2018, at St. Francis Borgia Church, 8033 W. Addison Ave., Chicago. Her Requiem Mass will be said starting at 10:00 a.m. Interment will follow immediately at St. Joseph Cemetery, Chicago.

Anne Virginia Gottmann was born at home in Chicago's Old Town neighborhood on February 20, 1932, to Sebastian and Teresa (nee Dumelle) Wolf. At birth she was named Anne Virginia Wolf and in her adult life went by the name "Anne," although many... View Obituary & Service Information

The family of Anne V. Gottmann created this Life Tributes page to make it easy to share your memories.

Send flowers to the Gottmann family.