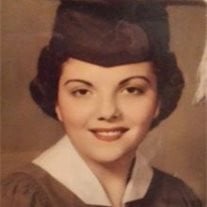 Betty (Heeg) Gonzalez was born in Berwyn, IL on September 9, 1937, she passed away in her home August 14, 2017 in the arms of her loving husband of 38 years, Ricardo. She was a loving wife, mother, grandmother and great-grandmother. One of Elvis' biggest fans she collected memorabilia and loved listening to his music. She was thrilled when the Cubs won the "Bing, Bang, Boom" World Series and loved watching sports with her many "children" She was a 2nd mom to so many that we joked she was like old Mother Hubbard with so many children she didn't know what to do. Her door was always open with food on the table. The family will receive family and friends on Saturday, August 19, 2017 from 3 pm to 9 pm at Schielka Addison Street Funeral Home, 7710 W. Addison Street, Chicago, IL 60634 773-625-3444. A brief service will be held around 5 p.m. She is survived by her brother, Arthur and sister Patricia along with her daughter Mary (Ron) Ulrich their children Christopher, Sarah, great grandson Jameson. Her son, Clifford (Carol) Davison their children Peter, Amanda (decd) and Corey. Daughter Cindy (Tom) Lavin and their daughter Gina Imburgia and her children Zachary and Zoey. Her son Mark Davison and his children Amber and Dillon. Her son Ken (Sheila) Davison and their children Ronnie, his children Zayden and Brayden, Jake (decd) his daughter Mackenzie, Michael and his daughter Lilly. Daughter Lorena (Brian) Garcia and their daughter Autumn, son Paul Davison and his children Candice, Courtney and Paul II along with many nieces, nephews, cousins and friends. She is preceded in death by her parents Mary and Edwin Heeg, her sisters Mary Agnes & Shirley along with her brother Bob. Donations can be made in her name to the American Diabetes Association of Chicago or the National Kidney Foundation. Interment private.

Betty (Heeg) Gonzalez was born in Berwyn, IL on September 9, 1937, she passed away in her home August 14, 2017 in the arms of her loving husband of 38 years, Ricardo. She was a loving wife, mother, grandmother and great-grandmother. One of... View Obituary & Service Information

The family of Betty Gonzalez created this Life Tributes page to make it easy to share your memories.

Betty (Heeg) Gonzalez was born in Berwyn, IL on September 9,...

Send flowers to the Gonzalez family.