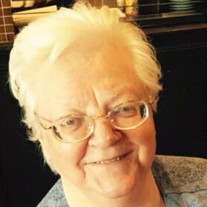 On Wednesday, December 12, 2018, Eulalia “Lila” Rapp, loving mother and grandmother, passed away at the age of 82. Lila was predeceased by her husband of 33 years, Joseph Rapp, who died in June of this year. She is lovingly remembered by her daughters, Corina (Rigo) and Tricia (Jim), her grandchildren, Melissa (Mitch), Dan (Erica), Joe, Emma and Ian, and her great-grandchildren, CJ, Levy, and Vida. Lila was also predeceased by her parents, her brother and her sister. Mass will be held on Saturday, December 15th at Presence Nazarethville Chapel, 300 N. River Road, Des Plaines, Illinois. Visitation will begin at 9:30 am, funeral service at 10:45 am, followed by internment at Maryhill Cemetery, 8600 N. Milwaukee Avenue, Niles, Illinois. Lunch will be provided at Cucina Biagio, 7319 West Lawrence Ave., Norridge, Illinois. Eulogy Eulalia Rapp (“Lila”) was born on January 9, 1936 to Teofil and Natalia Czyzewski in Radom, Poland. She was the youngest of three: she had a sister, Bogumila, and a brother, Rudolf (“Rudek”). In 1959, Lila married Zygmunt (“Ziggy”) Borkowski and moved to the United States shortly thereafter. After a long illness, Ziggy passed in 1984. Lila worked at Allstate for many years and during that time she met Joseph Rapp. During their courtship, they spent as much time together as possible. They worked together, so Joe would pick her up and drive her to and from work. They would eat lunch and frequently had dinner together. Additionally, they were notorious for tying up the phone lines at both their houses, much to the dismay of Joe’s young adult daughters. But how could either family be upset, as Joe and Lila were so happy and truly cared for each other. In June 1985, they were married in the company of their many friends and family. Lila was very committed to family and was happy to welcome Joe’s daughters, Corina and Tricia, into her life. Equally, Joe’s parents, sister, brother-in-law, nephew and niece welcomed Lila to the family. Corina and Tricia were happy that their Dad would not be alone, as he had found love and a best friend with whom to spend his life. Additionally, they were happy to have someone as wonderful as Lila to be their mother. The family continued to grow: Corina married Rigo and Tricia married Jim. Becoming a grandmother was one of the highlights of Lila’s life, as she doted on her grandchildren (Melissa, Dan, Joe, Emma and Ian). She loved to entertain the family, babysit and celebrate all her grandchildrens’ achievements. Unfortunately, Lila battled Alzheimer’s disease for more than a decade. Despite the challenges, she was always welcoming and had a big smile for her girls, their husbands, and her grandchildren. She was delighted to hug and play with her great-grandchildren: CJ, Levy and Vida. Joe and Lila loved each other deeply. They were always together, holding hands and smiling at each other. Lila struggled since the passing of Joe in June and they will be happy to once again be reunited in heaven. Lila will always be remembered for her love, acceptance and generosity. She will be greatly missed.

On Wednesday, December 12, 2018, Eulalia &#8220;Lila&#8221; Rapp, loving mother and grandmother, passed away at the age of 82. Lila was predeceased by her husband of 33 years, Joseph Rapp, who died in June of this year. She is lovingly remembered... View Obituary & Service Information

The family of Eulalia Rapp created this Life Tributes page to make it easy to share your memories.

Send flowers to the Rapp family.