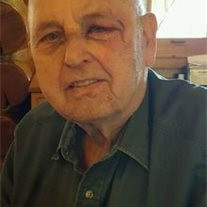 Henry William Rusch, 85, died Friday May 19, 2017, in Chicago surrounded by loved ones. He leaves behind his loving wife of 56 years, Mary Ruth (Heil) Rusch; daughters Ruth Marie Rusch, Laura Kay Nitanda (Jim), Barbara Jean Zeman (Mike), Karen June DeZetter (Jim), and April Suzanne Rusch (Jeremy Hodges); grandchildren, Marie Elizabeth DeZetter, Anthony Michael Zeman, and William Scott Zeman; nephews Edward Allen Rusch, Jaime Michael Rusch, and Lee Allen Michael Rusch; sister-in-law Diane (Dottie) Rusch, brother-in-law John Heil; many aunts, uncles, cousins, and life-long friends. He was also Godfather to his cousin David Blanke and a good friend's son Lawrence Brewer. Henry was born March 11, 1932, in his Grandparent's (Marie and Henry Yost) house on the south side of Chicago to Christ and Marie (Yost) Rusch. He was baptized, confirmed and married at his family's church, St. Paul Lutheran Church in Dolton, IL. He also attended school there until the eighth grade. He graduated from Chicago Vocational High School in 1950. Shortly after graduating he started working at Acme Steel. Working there was a family affair. His grandfather, father, uncles and cousins all worked there as well. He was a proud member of AFLCIO Steel Workers Union and made life-long friends. After working there for 35 years as a pipefitter/welder, he retired in 1985. Henry's life-long love of road trips started young with family trips to Idaho to visit family members. As a young man, he traveled the US with his friends. As a family man, he would pack up his family, hitch up a trailer and head west for entire summers. His last road trip was this past summer, back to Idaho for a family reunion. As a young man, Henry enjoyed scuba diving, stock car racing and bowling. He was active in leagues both at church and work. Henry married his wife Mary on his 29th birthday, March 11, 1961. They lived in Chicago and South Holland, IL before moving the family to Peotone, IL in 1972. Raising his daughters in Peotone, he was a member of Immanuel United Church of Christ. After retirement, Henry and his wife, along with the youngest daughter, April, moved to Farmington, New Mexico. There he was active in an archeology club that went on digs to Native American sites. Moving to Durango, CO in 1992. He had an active social life with his coffee buddies Harry, Cecil, Joe, Al, Ray and Nick. During this time Henry could be found up in Silverton, CO helping his wife in her business, Mad Mamma's Pies. Henry is preceded in death by his parents and brother Edwin Chris Rusch. Visitation will be Thursday, May 25 from 3 to 9 pm at Schielka Addison Street Funeral Home, 7710 W Addison St, Chicago, IL 60634. Services will be Friday, May 26, 11 am at Martin Luther Lutheran Church, 6850 W Addison St, Chicago, IL 60634. Lying in State will be at 10 am. Burial will take place in the afternoon at Homewood Memorial Gardens in Homewood IL.

The family of Henry W. Rusch created this Life Tributes page to make it easy to share your memories.

Send flowers to the Rusch family.