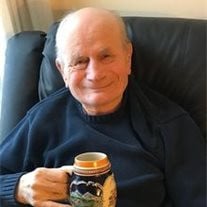 It is with great sadness that the family of Joseph Rapp announces his passing on Sunday, June 17th, at the age of 87. Joe is survived by Eulalia ("Lila"), his loving wife of 33 years. He is lovingly remembered by his daughters, Corina (Rigo) and Tricia (Jim), his grandchildren, Melissa (Mitch), Dan (Erica), Joe, Emma and Ian, his great-grandchildren, CJ and Levy, his nephew, Henry, and his niece, Christine. Joe was predeceased by his sister, Katherine Fohs. A celebration of Joe's life will be held on Friday, June 29th at Presence Nazarethville Chapel, 300 N. River Road, Des Plaines, Illinois. Visitation will begin at 9:30 am, funeral service at 10:45 am, followed by internment at Maryhill Cemetery, 8600 N. Milwaukee Avenue, Niles, Illinois. Lunch will be provided at Zia's Trattoria, 6699 N. Northwest Highway, Chicago, Illinois. Joseph Rapp (known by everyone as Joe) was born to Georg and Katharina on October 31, 1930 in Hrastovac, Croatia (formerly Yugoslavia). He was born on a farm and would tell us how they would use a cow to pull their cart to market as they could not afford a horse. His classmates would tease, "Joe, why does your horse have horns?" His other claim to fame was that he was the first child in the village with rubber boots thanks to a gift from an uncle. Joe had a wonderful relationship with his sister, Katherine, who was 5 years younger than him. During the war his family had to flee their home and were the last ones to make it out of the village prior to the partisans blowing up the bridge. Dad would tell us that they almost did not make it, as his mother was carefully packing the china. After a very difficult journey by foot, they ended up in a refugee camp in Austria for the remainder of the war. They briefly settled in Austria where Joe apprenticed as a bricklayer. He emigrated to the United States in the 1950's. He was very proud to become a US citizen and worked hard to learn the language and blend in. Joe had two daughters from his first marriage, Corina and Tricia. He was a remarkable father, he cared deeply about family and made many sacrifices for his daughters. Joe and his daughters moved to Ireland, where he married his second wife, Dorothy. They lived in the United Kingdom until Dorothy passed away when Corina and Tricia were teenagers. Shortly thereafter, Joe and his daughters returned to Chicago where he took a position at Allstate and met Lila. While courting Lila, Joe would spend hours tying up the phone each evening after work. We would tease him, as we were not allowed long calls to our friends, but it was lovely to see him so happy again. Joe married Lila in 1985, by which time he had endeared himself to Lila's mother and brother and was warmly welcomed into their family. He was always very friendly and out-going and welcomed his sons-in-law, Rigo and Jim to our family. He really enjoyed frequent family gatherings and spending time having a beer with his new "sons". Dad loved to entertain with jokes and stories and had few favorite jokes that drove us crazy every time he repeated them. Dad would always say one of the best days of his life was the day he became a grandfather. He was very involved in the lives of his grandchildren: Melissa, Dan, Joe, Emma and Ian and always told them how proud he was of them. More recently our family was blessed with the births of CJ and Levy, his great grandchildren. He adored them and wanted to see them everyday. While Dad had a tough childhood, due to the Second World War, he made the most of his opportunities, worked hard, and cared for friends and family. Dad's love, strength, and resilience truly cemented our family together and he will be greatly missed.

It is with great sadness that the family of Joseph Rapp announces his passing on Sunday, June 17th, at the age of 87. Joe is survived by Eulalia ("Lila"), his loving wife of 33 years. He is lovingly remembered by his daughters, Corina (Rigo)... View Obituary & Service Information

The family of Joseph Rapp created this Life Tributes page to make it easy to share your memories.

It is with great sadness that the family of Joseph Rapp announces...

Send flowers to the Rapp family.