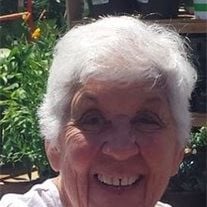 Sara B. Schmidt passed away peacefully in her home on May, 5 2017 at the age of 85. Sara DiPrima was born March 12, 1932 in Chicago to Charles and Antoinette DiPrima. Sara was born the youngest of four. Sara graduated from Foreman High School in 1950. Just after high school, Sara met her future husband, Bernie Schmidt, at Victor Adding Machine. Shortly thereafter, on Valentine's Day 1952, they got engaged. Bernie was drafted into the Army to serve in Korea during the Korean War. While he was on furlough, Sara and Bernie wed on October 4, 1952 at St. Bartholomew in Chicago. Sara and Bernie have three children, Bernie, Teresa, and Mary. They purchased their house on Oriole in September of 1960, and still reside there to this day. Sara spent many years working at Mother Guerin High School and Main West High School. Sara loved to spend time outdoors, and many of those summers were spent at The Cottage in Antioch. She would plant flowers in the garden and float in her chair in the lake. Sara loved animals and always had at least one dog as her companion. Quite often, she spent many visits to The Cottage with her grandchildren, who she cherished, spoiled, and would treat. Sara also loved to cook. Whenever there was someone over, there was always plenty of scrumptious food to be had. She loved to bake, and enjoyed watching people enjoy her desserts. Sara was a devoted Catholic and served at St. Francis Borgia with several tasks over the years. She served on the Catholic Women's Club and earned Woman of the Year in 2007. Sara was a very proud and strong Italian woman. She is survived by her husband Bernie, her children Bernie (wife Donna), Teresa (husband Bill), and Mary (husband Jeff). She is also survived by her four grandchildren; Matthew (wife Veronica), Joseph (wife Kim), Jeffrey, and Nicole. Additionally, she is survived by her great-granddaughter Isabella. She is also survived by numerous cousins, nieces, nephews and countless friends from all walks of life. Sara was preceded in death by her sister Mary and her brothers Charlie and John. "When you die, it does not mean that you lose to cancer. You beat cancer by how you live, why you live, and in the manner in which you live." -Stuart Scott Funeral services: Sara will lie in state 9:30 AM, Tuesday, May 9, 2017 at St Francis Borgia Church, 8033 W Addison St. with a funeral mass to begin at 11:30 AM. Entombment will be at St Joseph Cemetery in River Grove IL. In lieu of flowers, the family asks that you consider a donation to the Deaf Ministry at St. Francis Borgia, through Father Joe Mulcrone.

Sara B. Schmidt passed away peacefully in her home on May, 5 2017 at the age of 85. Sara DiPrima was born March 12, 1932 in Chicago to Charles and Antoinette DiPrima. Sara was born the youngest of four. Sara graduated from Foreman High School... View Obituary & Service Information

The family of Sara B. Schmidt created this Life Tributes page to make it easy to share your memories.

Sara B. Schmidt passed away peacefully in her home on May, 5...

Send flowers to the B. Schmidt family.